PHONE: 435-634-1967
Report Bullying
OUR MISSION:
Creating a Student-Centered
Community Focused on Learning,
Growth and Excellence for all.

Congratulations to all of those in the Fantasy art festival!

Topher Belmont– for placing 3rd place in the Painting & Technology category. Maxwell Petralia-for Honorable Mention in sculpture Ali Alverson-for Honorable Mention in Imaginary worlds. Gabby Dutson-for honorable Mention in Myths and Legends. To see awesome pictures visit @snowcanyonartists on Instagram
We had 5 Warrior basketball players receive Deseret News “All – State” Recognition.
Lyman Simmons – 4A Player of the year
Bowen Hammer– 1st Team All – State
Owen Mackay-1st Team All-State
Kaleb Anderson-Foreman- “Honorable Mention”
Will Warner– “Honorable Mention”
Congratulations to Olivia Jenkins, the first woman accepted to West Point from St. George. Click here to read more.
Snow Canyon Track won the boys’ meet, with the Warriors scoring 97 team points
Bo Hickman won the javelin with a throw of 201 feet, 6 inches, nearly 29 feet farther than that of the second-place finisher.
We also had three other athletes place among the top six in the long jump, with Jake Hill taking third, Matt Maclennan taking fourth and Trevor Gough placing sixth. Trevor Gough also placed second in the 300-meter hurdles.
Owen Mackay  won the high jump, clearing 6 feet, 4 inches.
Boys placed first in the 4×100 relay with a time of 43.34
Kristin Cook  won the 100-meter dash in a time of 12.29 seconds, and also took first in the 200-meter dash with a time of 25.26.
Hailee Phillips won the 800-meter run in a time of 2:19.62. She also placed third overall in the 1,600.
Small Ensembles and Individuals who qualified for State:
– Percussion Ensemble playing Sofapilla – I (Superior)
– Chamber Orchestra playing L’estro Armonico – I (Superior)
– Max Torres – cello solo – I
– Emma Hansen – cello solo – I
– Ben Krieger – Trombone solo – I
– Ella Packard – Snare solo – I
– Megan Hansen – flute solo – I
The Warrior Wrestling Team Made History Again! Our Boys Wrestling Team took 2nd in State! That is a New State Record! No team from Washington or Iron County has ever placed that high as a team in the history of Wrestling in Utah!!! They DOUBLED their record for state placers with a total of 14! Four of our Boys Wrestlers made the State Finals and ROCKWELL JONES IS A STATE CHAMPION! Also, our Head Wrestling coach Nick Lang was named 4A Coach of the Year! Be sure to congratulate our wrestlers when you see them today: Asher Farr, Brenden Smith, and Vince Threlfall each took 2nd, as well as our first ever Girls Wrestling state finalist Megan Allred! 3rd place wrestlers were Kaden Guymon, Edgar Renteria, and Dominik Benedetto. Wrestlers that took 4th in state were Brayden Jones, Tegun Whitehead, and Phoenix Oliver. Cason Smith took 5th in state. And our 6th place wrestlers were Breccan Fisher, Beau Miller, and Tag Gubler! Way to go wrestlers!

Congrats to Lyman Simmons – 1,000 pts. Pretty amazing accomplishment and doing it as a Junior!

Eshelles swept their competition today with first in all three routines and first overall. If you want to send on to your publicity person. 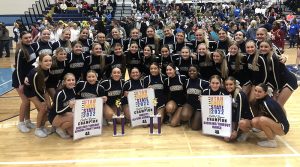 Our SCHS XC team Made History yesterday at the State Championships.  Our Boys team finished 3rd which is the highest finish EVER in SC history Boys or Girls!!  Spencer Smith led our Boys team with a 2nd place finish running 15:47 for 5K.  This 2nd place finish is the best ever finish for an individual (Boys or Girls) in SC History!!
Sterling Scholars:
Sterling Scholars:
Snow Canyons Concert Band participated in the Region IX festival at PVHS .  They gave a stellar performance of three works (Quicksilver Galop, The Seal Lullaby and The Cave You Fear) and adjudication results came in this morning.
Ratings were (I, I, and I-) which is hard to get. This qualifies them for the UHSAA state festival as well. If you see any of them out and about be sure to congratulate them.
Shellsea Ramirez place 2nd at 4A state Debate in impromptu speaking.
Science Olympiad State Results:
#1 in Water Quality –  Ella Spendlove and Scarlett Deuel
#3 in Detector Building – Joseph Fife and Toshi Mowery
Tyler Awerkamp was announced by the American Volleyball Coaches Association’s Boys All-America Watch List! Tyler is the only athlete to be recognized in the state of Utah.
Kade Andra has won State Reflections!! His piece will be advancing onto regionals May 1, wish him luck!
To see almost 400 other amazing works check out @snowcanyonartists  on Instagram

UHSAA presents the Academic All-State Award to recognize those students who have excelled in the classroom as well as in athletic competition. Individuals are selected for this award on the basis of their athletic ability and academic proficiency. With over 85,000 students participating in high school activities, this award is the most prestigious honor the UHSAA presents to senior students. Snow Canyon High School is proud to congratulate and pay tribute to four individuals who have earned and received this distinguished award:

A big congrats to the SC Jazz Ensemble who qualified for “State” and were awarded the highest possible rating of “Superior” ]. The Jazz Band performed a swing chart,  a ballad and a latin number for their set.  Saxophones section members were Kaycen Wagner, Carson Gubler, Cristian Galdamez, Heidi Schroath and Raul Martinez.  Trombones were Lane Reeves, Alex Merdes, Kasen Graff and Will Bergens. Trumpets were Bradon Ramirez, Kada Andra, Andrew Ord and Joseph Fife. Xavier Pinna played Guitar, Cayson Davenport drum-set, Jordon Crosby – the electric and String Bass and Mya Elzy Auxillary Percussion.  Featured soloists were Brandon Ramirez, Alex Merdes and Chrisitian Galdamez. If you see them, be sure to congratulate them. Watch the stream here: https://youtu.be/u66sudpfEPI

Audrie Spendlove won the Southwest Region Poetry Out Loud competition.  She will now go on to compete in the State Competition on March 8th. Good Luck Audire!

Congrats to the following students who will be competing as finalists in the Utah DECA State competition.

What an awesome year for our Warrior Swimming Program. The SCHS Boys’ and Girls’ Swimming Teams took 1st place at the Region 9 Swimming Meet a couple of weeks ago. We have some awesome swimmers in Region 9, so this is an outstanding achievement. This past weekend, the SCHS Boys’ team took 1st place at the UHSAA 4A State Championship Meet. This is the first Swimming State Championship for SCHS. The SCHS Girls’ team placed 3rd. We are so proud of our swimmers, Coach Charlie Barnett, and the support of our local pools and swimming community for making it possible for our students to compete this season. Read more here

OUR MISSION:
Creating a Student-Centered Community Focused on Learning, Growth, and Excellence for ALL.